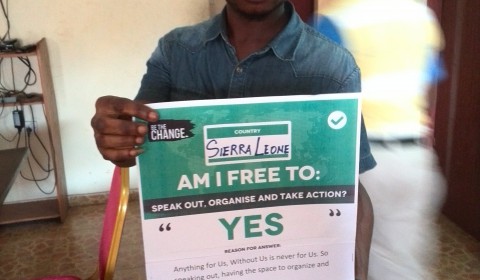 There can be Nothing for Us Without Us!!

Youth Partnership for Peace and Development being very keen to following up on the African First Ladies Against HIV/AIDS (OAFLA) initiative, we very much appreciate the fact the First Ladies on the African continent. Noting that  Sierra Leone’s First Lady, Mrs. Sia Nyama Koroma, responded to the invitation of her Ghanaian counterpart, Dr. Nana Dramani Mahawa, who is the current President of the Organization of African First Ladies Against HIV/AIDS (OAFLA), by attending the 7th Africa Conference on Sexual and Health Rights held in the Ghanaian capital of Accra from 9-10 February.

Even though the event did not clearly spell the sexual health needs of other sexually active group of adolescents such as those in the LGBTI category, we feel that this will be a great start to ensuring that as we reach young people at scale, we also continue doing so with those in the sexual minorities category.

The grand opening ceremony of the impressive four-day event was graced by Ghanaian President John Dramani Mahama, who declared the conference open. His statement was preceded by an opening address that was delivered by her wife, the First Lady of Ghana, Dr. Nana Lordina Dramani Mahama, who emphasised the need for healthy, educated and skilled adolescents and youth, especially girls, so that African countries could reap the demographic dividend; a new development concept that has been introduced by UNFPA.

She called on African countries to invest in the health of young adolescents and to provide an environment that is open and free for discussion, as well as to avail adolescents with access to sexual and reproductive services and accurate information. She ended her remarks by stating that ignoring the youth will leave them open to vices such as lawlessness and extremism.

All the speakers commended the African First Ladies for their hard work in the health sector in particular, both in their home countries and within OAFLA. In one refrain, all the speakers called for an expanded role for OAFLA beyond HIV/AIDS. This call was also echoed by H.E. President John Mahama, who stated that the African Union must give this expanded role for African First Ladies a serious thought because they have played pivotal roles in development under the auspices of OAFLA, and in their home countries, that have impacted the lives of many segments of the population.

As an organization, the Youth Partnership for Peace and development with continue following up at the national level particularly with the implementation of the event’s major outcomes while ensuring the the needs of various categories of gender and sexual orientation like trans-genders are fully taken on board.

Help us reach our goal. Make a Change: Investing in Education for Children on @globalgiving: https://t.co/cgXW35wwEZ pic.twitter.com/zJsEsF2azQ

we work in partnership with others in overcoming the many barriers that are holding back development and at the same time build the capacities of citizens and their institutions by providing the needed tools that enables them to effectively engage in decision making.
1st Floor, 18 Priscilla Street Freetown, Sierra Leone
+232 76 307651 / +232 78 198224 UK: +44 7452 050127